How many of you have heard this statement before? I can think of countless times playing sport when a player would go down after a sprain and coaches, parents and staff would pass it as a minor injury, and the player would be expected to either keep playing or return to play as soon as possible. Certainly, this is not the mentality with other injuries, like hamstrings, knee ligaments or shoulder injuries.

So why do we play these injuries down? Is it because they aren’t important? Or because these ligaments heal quickly?

Unfortunately, the answer is no.

I feel that ankle sprains have been subject to enough ex-sports players on TV saying “its just an ankle sprain” so now it is just the norm.

So, what actually happens when we roll an ankle? 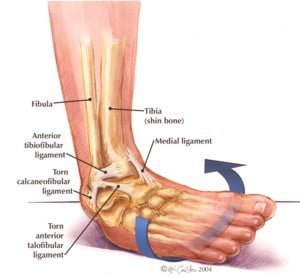 Well, when we look at the foot and ankle anatomy, it is complicated. Lots of small bones, held together with lots of ligaments which are moved by lots of tendons. When the heel bone (calcaneus) is rolled outwards, there are ligaments that are there to hold the foot onto the end of shin. If the force gets too much, the ligaments begin to stretch and deform, until a tear begins. Once torn, the body sends blood and resources to the ankle to breakdown the damaged ligament and start the rebuilding process. The brain makes the nerve endings more sensitive so you don’t keep running on it and injure it further, like a protection mechanism. The muscles that normally act to move the ankle and foot, change to a bracing pattern where they try to stop all movement.

So, we have a swollen, painful, muscle immobilised ankle that now does NOT have the supporting ligament that keep it from re-rolling.

Does returning to play sound like such a good idea now?

So, once the swelling is gone, we are ok though, right?

Research has shown us that once you roll your ankle the first time, you become massively more likely to roll it again in the future. And even more so after the third time.

So, the more times you roll it, the more likely you are to roll it again.

I am sure a lot of you reading this are thinking, “But I roll my ankle all the time, and I’m ok”.

And you may be right. But you can imagine how the ligament becomes more and more stretched and scarred from repeat injuries and force which it puts on the ankle joint and cartilage itself. This is a recipe for early degeneration of the joint.

So, if we aren’t returning to play, what is the right way to rehab an ankle?

Speak to your physio. They will be able to guide you through the process which will always involve:

·         Improving the muscle control so you can walk, run and jump without re-rolling